It’s that time of year again! Maryland Sheep and Wool Festival was this past weekend. I went on Sunday, and although it was a rainy, muddy day, I had a fantastic time as I got to spend it with some good friends. One friend had never been to the festival before, so it was quite delightful showing her around (we spent a lot of time in the sheep barn admiring Jacob sheep). 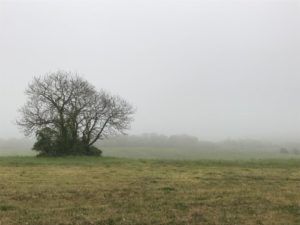 It was a year of minimal purchases for me, as I’ve been faster on acquiring than on using. I noticed, also, that multiple vendors I had bought from in the past were no longer there. I knew that last year there were a lot of retirements and closings, but it was definitely noticeable this year. That said, I got a beater for my tapestry loom (so I can stop using a plastic comb), some maple cream, woad and weld plants for my porch pots (hopefully they will dye instead of die–I’m bad at plants), and some processed natural dyeing materials.

Oh, and I bought another fleece. Oops. I ran into spinning friends in the fleece sale, and a shepherd was trying to convince one friend to buy a lovely grey fleece. I had been looking for a colored fleece. I got caught in the crosswinds of the sheep fumes. I need to set aside a fleece processing day.

However, the most exciting part of the festival, for me, was on Friday. I took my first ever workshop at the Festival! The workshop was “Yellow and Blue Make Green,” taught by Jackie Ottino, which focused on natural dyeing with yellows and then overdying to achieve greens. 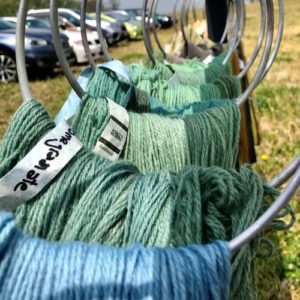 We dyed six different yellows using different dyestuffs (for example, powdered weld, yellow onion skins, and red onion skins) to find a sample spectrum of yellows that we could get from nature. 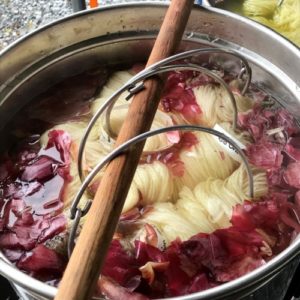 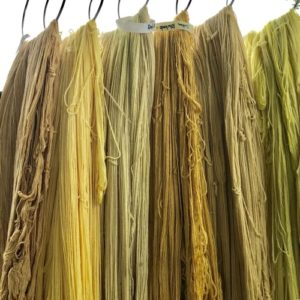 The colors were all quite surprising. Weld was quite electric, while other dyestuffs were muted or even tan. There was even a subtle difference between the yellow and red onion skins, with one being slightly greener.

Once the yellows were dyed, we dipped skeins of the six different yellows into an iron bath. We took another matching set and dipped them into indigo. Six samples of the yellow were saved as controls. The iron bath “saddened” the yellows, giving us a variety of olive tones and even some “mushroomy” greys. The indigos gave us truer greens and teals, and we dyed a couple of skeins with pure indigo just to have a sample. 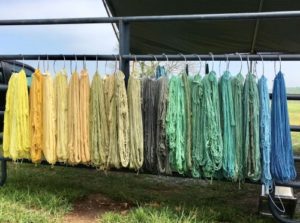 Jackie was a fantastic teacher who answered all of our weird and picky questions. She removed the fear of natural dyeing from me, and I’m looking forward to experimenting with this further — once I process that fleece!

Finally: I took a video of the indigo oxidizing. Enjoy — it’s magic! 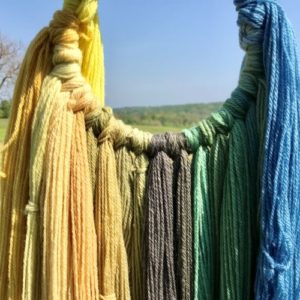 In the previous iteration of this site, I was unhappy with the direction I took with my blog posts. I felt like I was treating my topics too shallowly and briefly, and that much of it was repetitive. The overall website also needed an overhaul that presented my patterns better and supported a gallery.

Because of these two issues, I started to let the site languish, as I couldn’t find time to really sit down and bash it out (this… is an issue I have with big tech projects). The languishing was exasperated by the fact that my computer is getting quite old (need to get a new one before New Year!), and I have a history of getting cross with website layouts if I don’t maintain them (what can I say? I like redecorating).

Most importantly, during my hiatus, I found that my artistic goals had started to shift. Which brings us to…

First, I’m planning to post (somewhat) regularly again! However, I’m aiming to write posts with depth and substance (or at least something more than “argh this pattern is killing me”), so they might be slightly more irregular than weekly.

Second, I now have a pattern page with links to my patterns on Ravelry! I have written several patterns over summer this year, so once they have finished testing I will add them as well.

Third, I have an actual gallery! It’s a little sparse right now, but I’m in the process of finishing a long-term project that will literally double the size. The gallery also leads me to the next part:

Another issue with the previous iteration of the website was that I had set my focus narrowly. I was trying to make the blog similar to other knitting blogs out there, instead of letting it be what it wanted to be and giving myself the room to do what I wanted with it.

Therefore, one of the most significant changes is a wider, shifted focus. Instead of simply focusing on general knitting projects (“what’s on the needles” posts), I will be focusing on the artistic aspects of my work, whether it’s an art piece I’m working on, a new pattern I’m writing, or someone else’s pattern.

I’m also going to focus on the process over the results. Previously, I found I was getting hung up on the fact that I didn’t have a lot of finished items to show. My projects moved slowly because I had a lot of balls in the air (and I prefer working on multiple projects simultaneously). I felt bad that I was sharing the same work for months on end, which meant that I just didn’t post anything.

Another change is materials. I’m still working a lot in fiber art, and it’s still my primary focus, but in the process of refining my fiber work I have found that I am returning to traditional materials. I’ve returned to sketching, and I’ve even been participating in Inktober. I also have upcoming projects that require illustration and painting, and I’ve had a hankering to explore sculpture through more common and/or traditional materials.

In addition to these changes, I have been doing a lot more costuming. In fact, over the last year, I’ve dived headlong into the medieval reenactment scene, which lets me play with fiber arts and use my academic knowledge and learn more crafts. And I remembered how much I love handsewing! So expect posts from that part of my life as well, because the boundaries on my art are only the ones I impose.

So welcome to the new Unspun World.